I hope you all had fun with last weeks block. I know I did. My three (yes of course I am doing the biggest size) are done, and not at all what I thought I was going to do. Well perhaps it is more accurate to say I had forgotten to think very much about what I was doing and my choice of blocks last week made some decisions for me. I decided I wanted to do dutchmans puzzle, but as a 12″ block that means some pretty large pieces of fabric. That put me off using either solids or fabrics that read as solid I wanted something more interesting. I think I may also have still had my head in the quilt I had been working on the week before in my holiday retreat (yup I should blog that). So it seems my blockdown quilt will involve fussy cutting. I think as there aren’t too many blocks each week that shouldn’t be an issue and I have a stack of fabrics I can use for this, they were just sitting in my stash maturing good to get them some exercise. The block that caused this decision came out like this,

It is not the traditional colouring, but I felt the fabrics looked more interesting in pairs like this so I went with it. I have a feeling this may have some other name but I will claim my intention was dutchman’s puzzle so it counts. My second block is star puzzle. This isn’t I block I had heard of before this week, which was rather the point of the exercise, and I do really like it. I found a lot of different ways to colour it and chose this one because to me it felt rather like the star was glowing , making the black background grey. Look closely at the center, it is alternating colours of the same fabric. 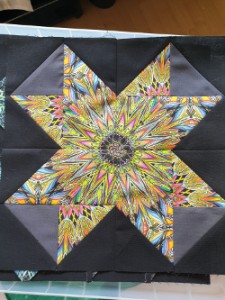 I was very pleased with how the center worked. I was hoping to give the illusion of a single design from the fabric and that has mostly worked out, despite me being a little slapdash on picking where to cut. My final block for part 1 is the yankee puzzle. This one caused me some concern on the fabric placement, but actually turned out to be very simple, I just had to wrap my head around how stripes work on triangles. It did give me much more confidence for future blocks with these fabrics. 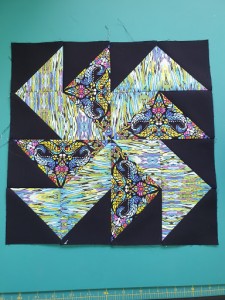 When we had our discussion group last Tuesday we found a huge number of blocks, I have notes on about 30. I sort of regretted having already picked my three. On the other hand it did stop me procrastinating, which was really useful. So I will be doing the same this week, to keep this as quick and simple as I can. It does mean I miss out on some great blocks but I am also building my own notebook of things I would like to revisit. So in the future I can go back to some of these. Even within this quilt there is scope for some of the blocks I missed first time around within other weeks.  I am expecting to do less fussy cutting on smaller blocks too, not just so they will be simpler and quicker but also because I don’t think the fussy cutting will be as worthwhile on smaller pieces.

I guess it is time to tell you what we will be making this week, 6″ blocks on the theme 9 patch.

Remember that any block made of a 3×3 grid is essentially a 9 patch. Many books will list blocks by their underlying grid which might be helpful for this one. Equally draw yourself some grids and have a play, maybe you can come up with a new block.

If you are playing along and are happy to share your blocks, I would love to put up some photos each week to show the variety of blocks and colours that are possible. Email me photogrpahs of your blocks and I will try to get up a collection each week. It would be great if you could include the block name (if known) and let me know how you want me to credit the photo.