Yay I am back

No idea what had been wrong, maybe the puppy had been keeping to computers up all night as well as me. This has been a very educational month. I have learned that sometimes getting time for a shower is the most amazing luxury. Heck getting to the loo can be pretty fantastic. Youngsters are demanding, crazy, brave and have no clue when they are tired. Having strict rules helps, even though it isn’t always fun or infalible. It is surprisingly easy for a cute puppy to meet over 100 people before they are 12 weeks old, some of those 100 will have no clue how to greet a dog.

Fenrir has grown amazingly, he has gone from 7.5kg to just over 10kg in 3 weeks. This leaves him with no clue where his limbs are or how strong he has become. This last week has been crazy, he is finally fully vaccinated and we want him to experience as many things as possible before he is 12 weeks old. We managed 4 towns and a whole range of floor surfaces and weird stuff. Most of which he has taken in his stride with just a few cases of over excitement. Joggers are the most concerning things we have seen, with very heavy traffic coming second.

So as promised some more up to date photos of the little chap, then back to quilting. 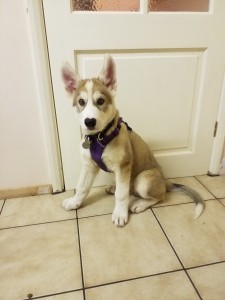 Latest mug shot, trying to be appealing after failing to listen, yes yes just like any child 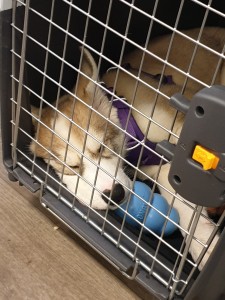 This was during a class, it’s very tiring meeting new people.

His first outing was in his chariot, as he wasn’t allowed to walk anywhere public till his second vaccination. He chose this toy, it has some absurdly manly title about powerful chewers. It was soft enough for baby teeth so I let him have it, well it turns put to be his favourite thing to chew and he now has the other toys in the same range. I guess I should have trusted his judgement. 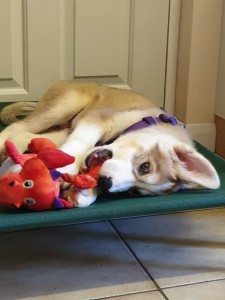 This dragon is a very neat toy and also much loved. It’s a knotted rope in a furry skin.  So popular we have bought a spare.

Professional car traveller. Initially he was desperate to get out of the car, now I have to encourage him out. He still isn’t keen to get in but at least once in he is happy.